Formed in September 1983, the Choir has grown from 28 members to around 50 and has established a reputation for high standards of singing and presentation.

The Choir’s repertoire comprises over 260 pieces of music covering 400 years and spanning many styles from Byrd to works specially commissioned in recent years. Several of these are sung in their traditional language including French, German, Latin and Welsh, as well as Russian, Spanish and even Breton. 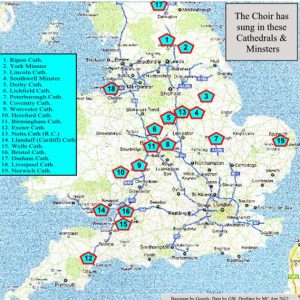 The choir has given well over 500 concerts in England and Wales, taking in 200 venues, ranging from village halls to rural churches, as well as 20 cathedrals, the latest being Ely and Gloucester.  Other notable venues have included Whitehall Palace, the Royal Hospital Chelsea and the Cutty Sark in Greenwich.

Locally the Choir has sung at Belvoir Castle, the National Ice Centre, the Royal Concert Hall, the Albert Hall in Nottingham and even Papplewick Pumping Station. In a typical year the Choir makes as many as 15 appearances, raising many thousands of pounds for charities and good causes in the process.

The Choir has visited France, Germany (3 times) Belgium and Italy and has hosted choirs from the Netherlands and Moscow, as well as exchanging visits with choirs from Germany and South Africa. Closer to home the choir has exchanged visits with choirs from South Wales, Tyneside and Shropshire and has toured in Yorkshire, Durham, Merseyside, Norfolk and several counties in the South-west of  England.  In  April 2019  we had a weekend based in Huntingdon where we sang with that town’s MVC  and on the previous day, in Gloucester  Cathedral.

In 1993 the Choir took part in the second World Choir event in Cardiff with Shirley Bassey and some members took part in a subsequent event in Atlanta, USA.

The Choir’s 25th Anniversary was marked with a tour to Rome in 2008.

In 2016 the Choir joined 16 other choirs in the 25th London Welsh Festival of Male Choirs in London’s Royal Albert Hall in front of 6,000 people.

During the Choir Year 2017 – 2018 we sang 10 Concerts including two while on tour in the Cambridge area.  Two of these concerts were to commemorate the End of WW1.  As a result of these activities over £10,000 was raised for various good causes.