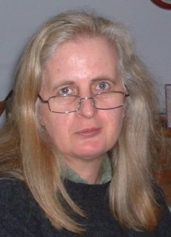 Deborah chose to join us in 2018 as Associate MD  and in September 2020  was appointed Musical Director.  She had previously established the Cranmer Company of Singers which has made well over 80 Cathedral visits within the U.K.; and together with the Cranmer Chamber Orchestra put on many concerts in venues ranging from Southwell Minster and Belvoir Castle to local Churches and village halls. She has attended overseas festivals in Italy and Gozo; been invited by the Mayor of Avila in Spain to sing in their beautiful Cathedral and city; been invited to sing in Finland, hosted by a Finnish choir and has raised in excess of £35,000 for charities through her music making activities.
Deborah established the Good Friday Charity ‘Come & Sing’ annual events at Bottesford Church, attracting as many as 190 singers from many counties each year to raise funds for those in need.
Deborah also directs the semi-professional Chamber Choir, Cantica Viva. This choir of music teachers, organists and conductors meets once a year to sing at Cathedrals within the UK and sang to great acclaim at the choir’s inaugural weekend at Bath Abbey in 2018.
As well as her new position with our Choir, Deborah has also recently taken on the position of Director of Music for the Old Dalby Singers.
She also creates a small Children’s Choir each year to sing at local village Christmas concerts and services.
Deborah’s qualifications include: M.A. in Music Psychology; B.Ed.; Music.Tch.Cert.; Associate of the Royal College of Music in Organ Teaching; Dip.Tch.in Ec./Geog.; Certificate in Social Welfare Law. 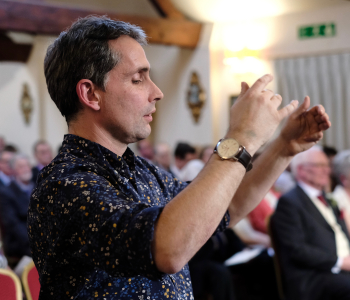 Peter Higgins trained for 5 years at Trinity College London, where he studied piano performance under Tony Lindsey and Simon Young. After graduating he embarked on a career both as a soloist and accompanist in and around London.  In 2001 he moved to Newark to train as a piano restorer and technician, finally achieving a qualification in tuning and restoration.

Becoming more and more interested in vocal work, he formed various choirs in the local area. These have become successful groups which allow all who participate to enjoy their singing and the sense of community that it creates.  Through the application of good humour and an attention to detail he believes that choirs can be uplifting and life affirming pastimes for all who participate.

In 1999 the Choir was very fortunate in persuading Eleonora Babitsky to be our Accompanist. Born in the Soviet Union, at a very young age Eleonora was recognised as an outstanding musical prospect. After 6 years at the Gnessin High School of Music for gifted children, Moscow. Eleonora’s studies continued at the Gnessin Music institute where she became piano assistant, a post she held till 1991. She was a regular performer with the Soviet State Philharmonic Society, specialising in chamber music and for 5 years was accompanist for Soviet Radio.
From 1991 –1995, she was engaged by the Hochshule Fur Musik, Munich. In much demand as a master class accompanist for string players, Eleonora has played for Igor Oistrakh, Daniel Shafran, Vladimir Spivakov, Michael Flaxman and many other distinguished musicians in Russia, Austria, France, Czechoslovakia, Italy and Germany.On three occasions – Russian Music Competition, Soviet Music Competition and International Tchaikovsky Competition – Eleonora was awarded the Diploma for best accompanist. In 2010 Eleonora instigated a memorable visit to Radcliffe from a ladies choir “Anima” from the Gnessin Music Institute in Moscow. 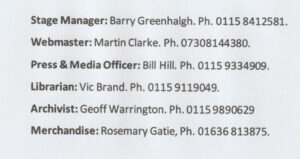