Our MD, Deborah, was recently interviewed by Radio Nottingham. You can listen here….

Some of the singers were happy to visit Radcliffe on Trent carnival in July 2022, just for the enjoyment of a warm, summer afternoon singing! 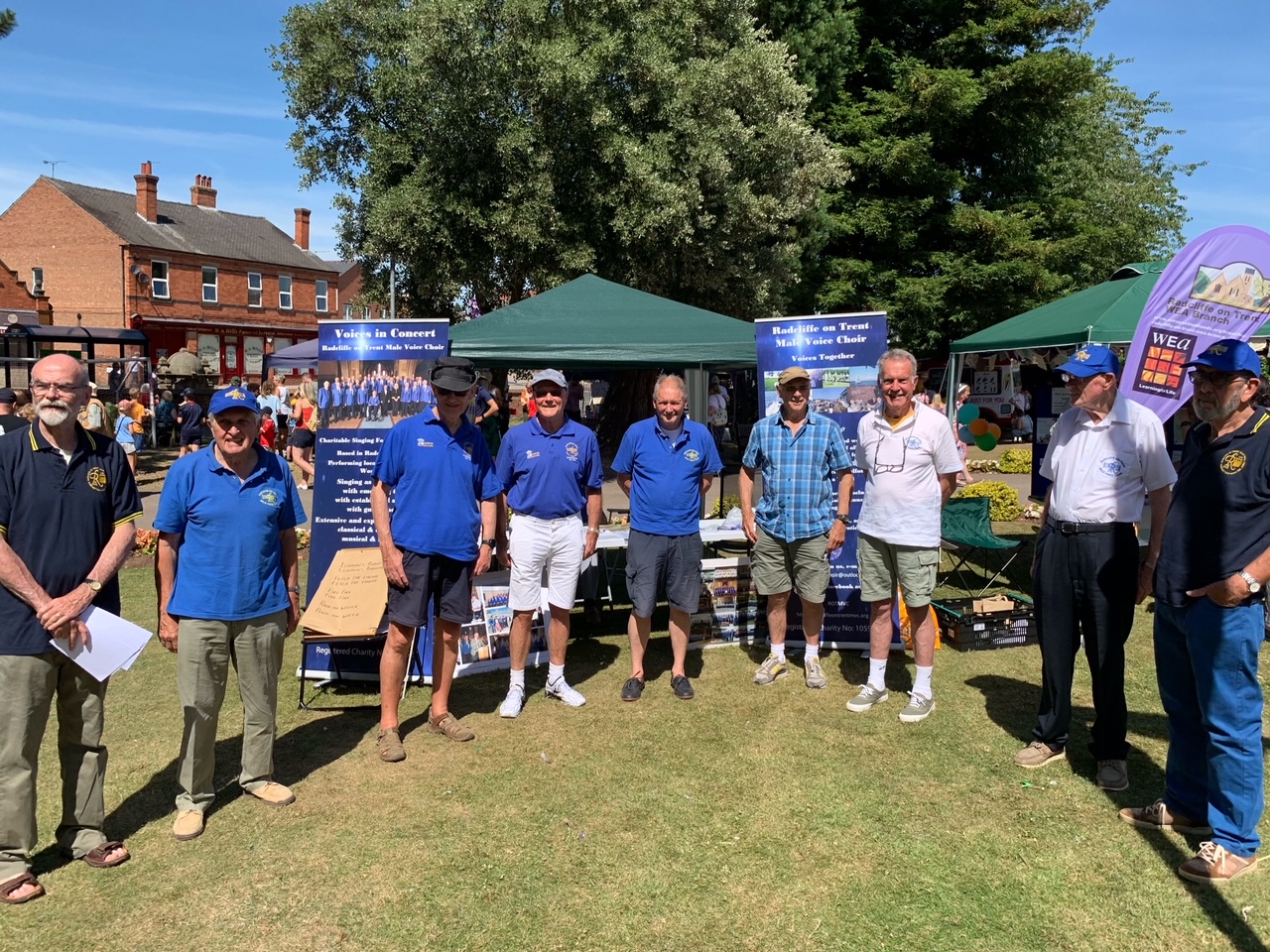 On the wonderfully warm day of 2nd of July, 2022, the choir visited Holme Pierrepont church and performed two sets with an encore!

An earlier engagement, on 4th June, was a return to the National Trust’s Clumber Park Chapel, where we had previously sung on the 19th March. 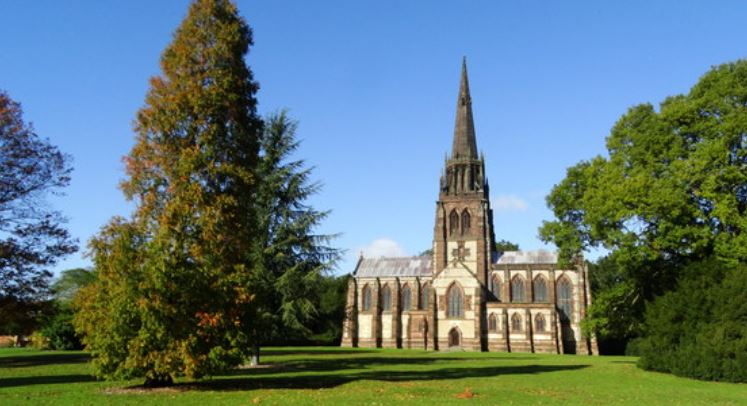 On this occasion, we sang two separate 30 min sessions, at 12.00 and 13.40, as part of the local National Trust’s Queen’s Jubilee celebrations.

This left time to enjoy a picnic or use of the large adjacent cafe and a stroll around this beautiful park and lake.

2. Our previous performance, on Saturday 21st May, was part of the MAY MUSIC 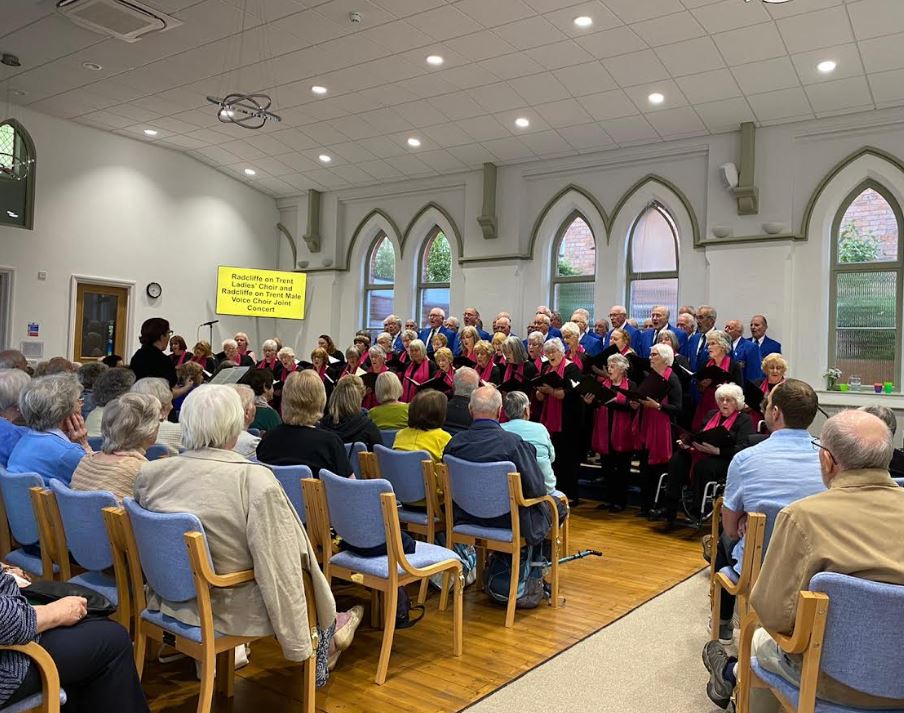 FESTIVAL held at the Radcliffe Methodist Church on Shelford Road. (See photo of us and the RoT Ladies Choir combining for the finale).  This event raised over £2300.00 for the Rainbow Hospice and The DEC Ukraine Appeal. To show the variety of talent on show see the program below. 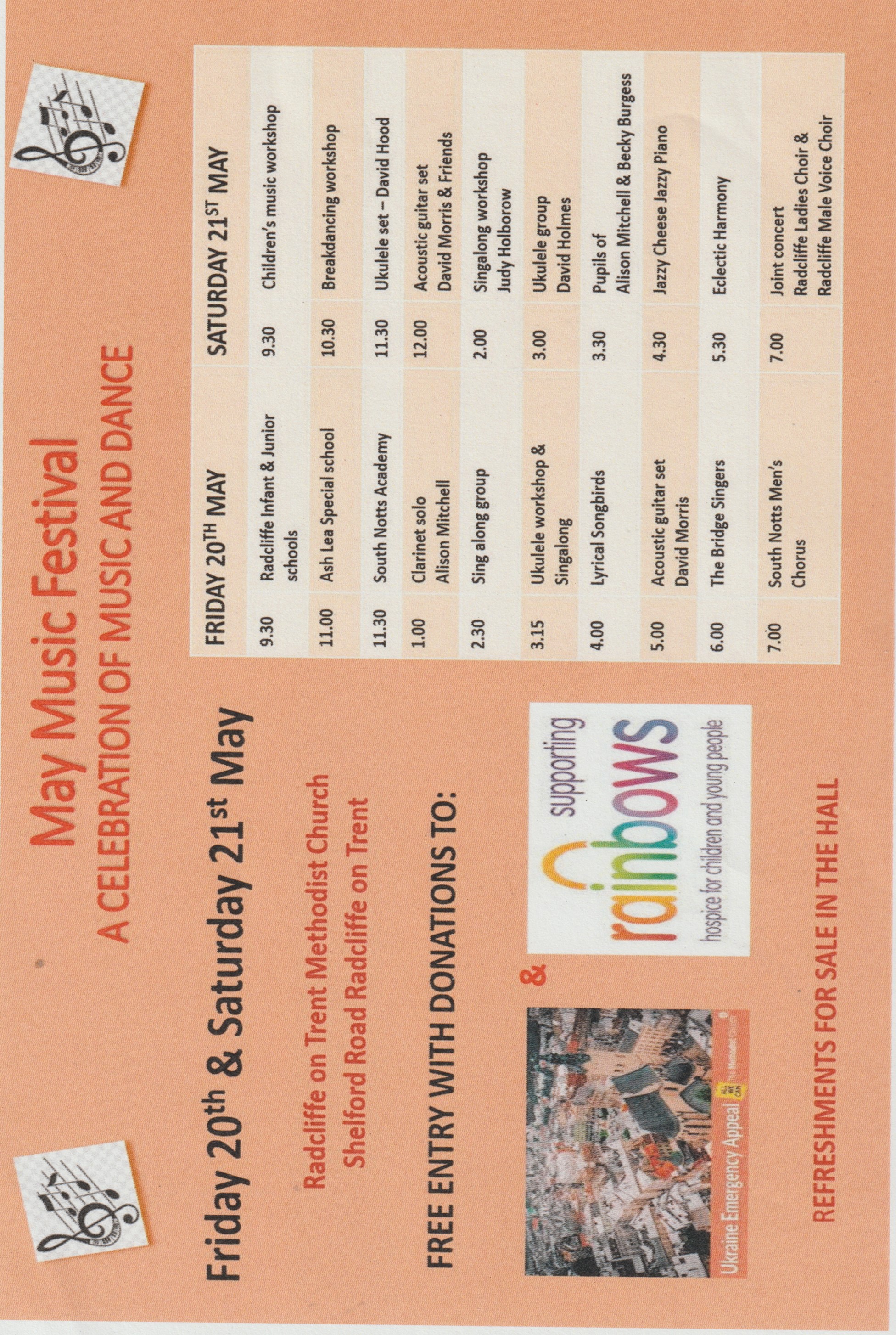 3. On the 1st of May the Radcliffe on Trent Male Voice Choir was honoured to be one of the invited choirs from the East Midlands to Sing For Ukraine, organised by Bestwood MVC. This event showcased the power and subtlety of Male voices in concert. The program featured favourite pieces chosen by each choir and specific Anthems for Ukraine.  The event raised just over £3,000.00 for the chosen charity! 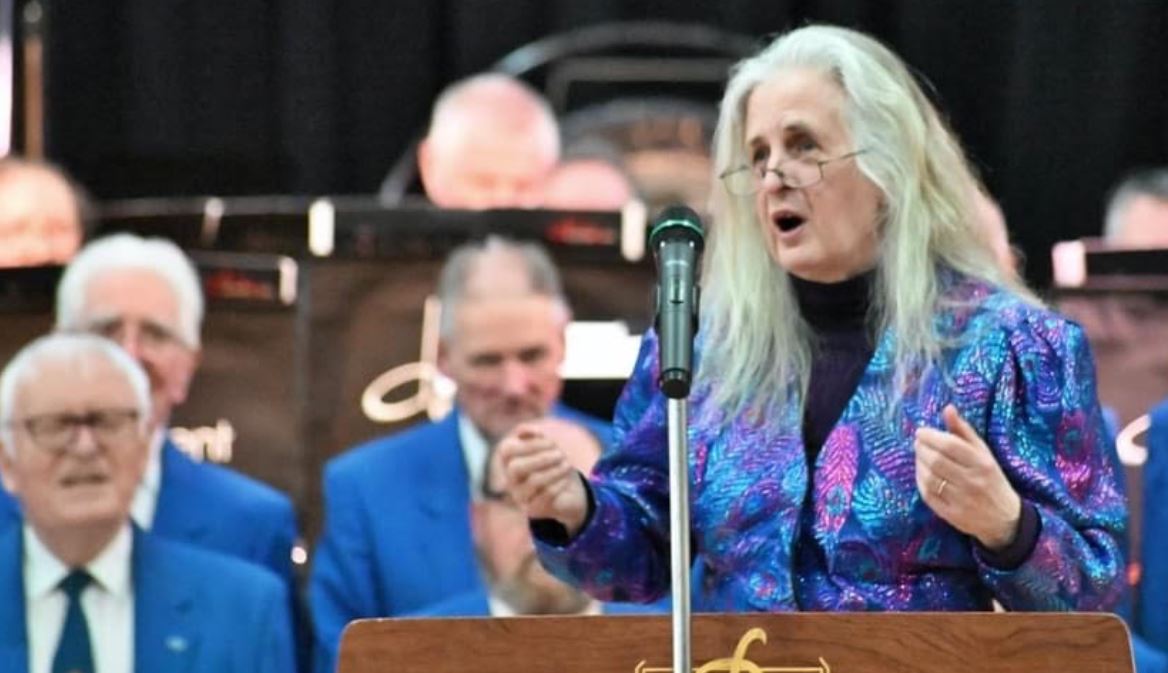 Previous updates:- We were pleased to report that on Thursday 13th January we held our first practice of the New Year and sincerely hoped that there would be no more interruptions due to Covid.  However, we sadly have to report the recent deaths of two very valued associates of the choir.

The first loss, on December 30th, was one of our own, Colin Macmillan, a member of the Baritone Section since 2013.  We were invited to sing at Colin’s Funeral on the 4th Feb at Edwalton Holy Rood Church.

We performed the first of our two scheduled Christmas concerts on the afternoon of Saturday 4th Dec at David Rose’s Eco Farm Barn at Screveton, near Car Colston.   The photo below, courtesy of Choir member Geoff Warrington, shows us enjoying mulled cider at the interval. 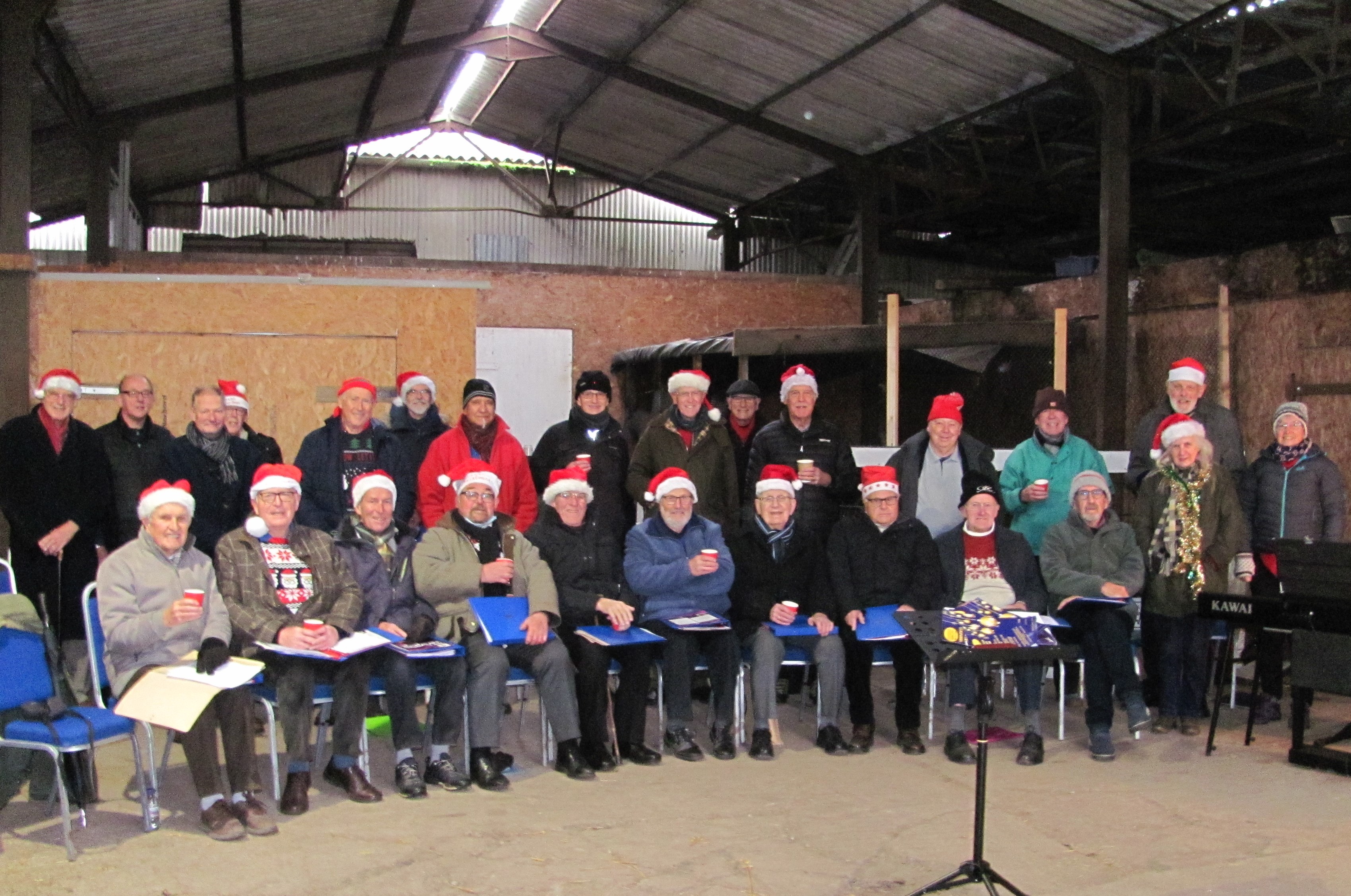 This was part of a Christmas Fair which included local craft and produce stalls, children’s tractor rides, mulled cider and mince pies and a Nativity playlet which featured Joseph and Mary’s search for shelter ending with a stable scene with cattle and sheep from the farm.  The concert featured a variety of carols the singing of many of which we were enthusiastically joined by the extensive audience. A most enjoyable experience marking our first public performance since December 2019!

Our second seasonal event was to have been our ANNUAL CHRISTMAS CHARITY  CONCERT  which was to have taken place at Grange Hall,  Radcliffe on Trent at 2.30 pm Saturday 18th December but was cancelled due to Covid constraints.

As of the 2nd September 2021, we returned to practising each Thursday in the newly refurbished Methodist Church,  Shelford Rd., Radcliffe on Trent.    These practices start at 7 pm and any interested folk are welcome to sit in.

July 1st 2021 marked the occasion of our first live practice since early 2020. This was attended by 20 members, including our MD Deborah Davies and Accompanist Eleonora Babitskaya. Those attending were expected to wear masks, have had two vaccinations and to have self-tested. The following three photos are of this event which took place in a well-ventilated barn at Home Farm,  Screveton, each Thursday in July 2021. 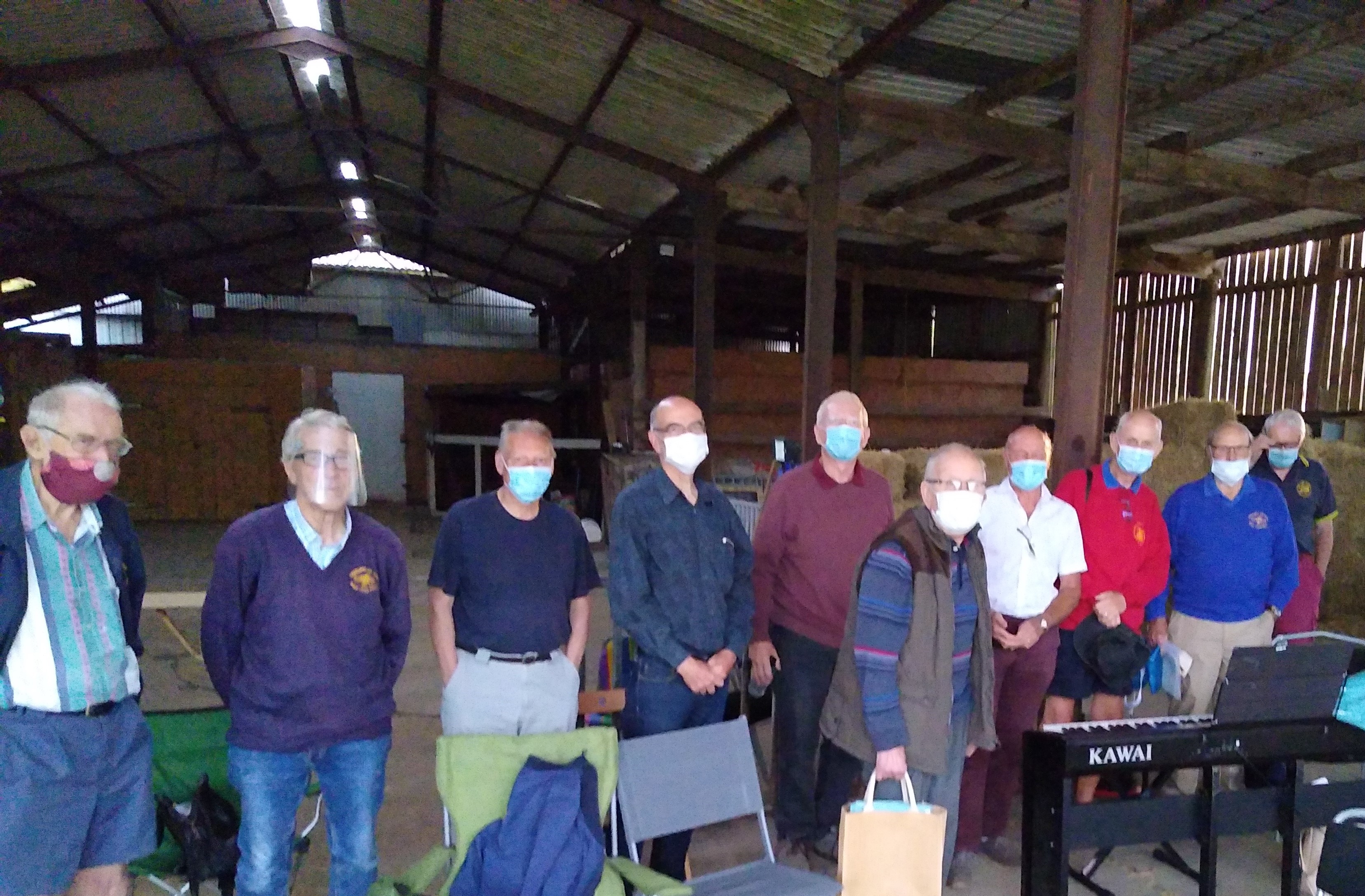 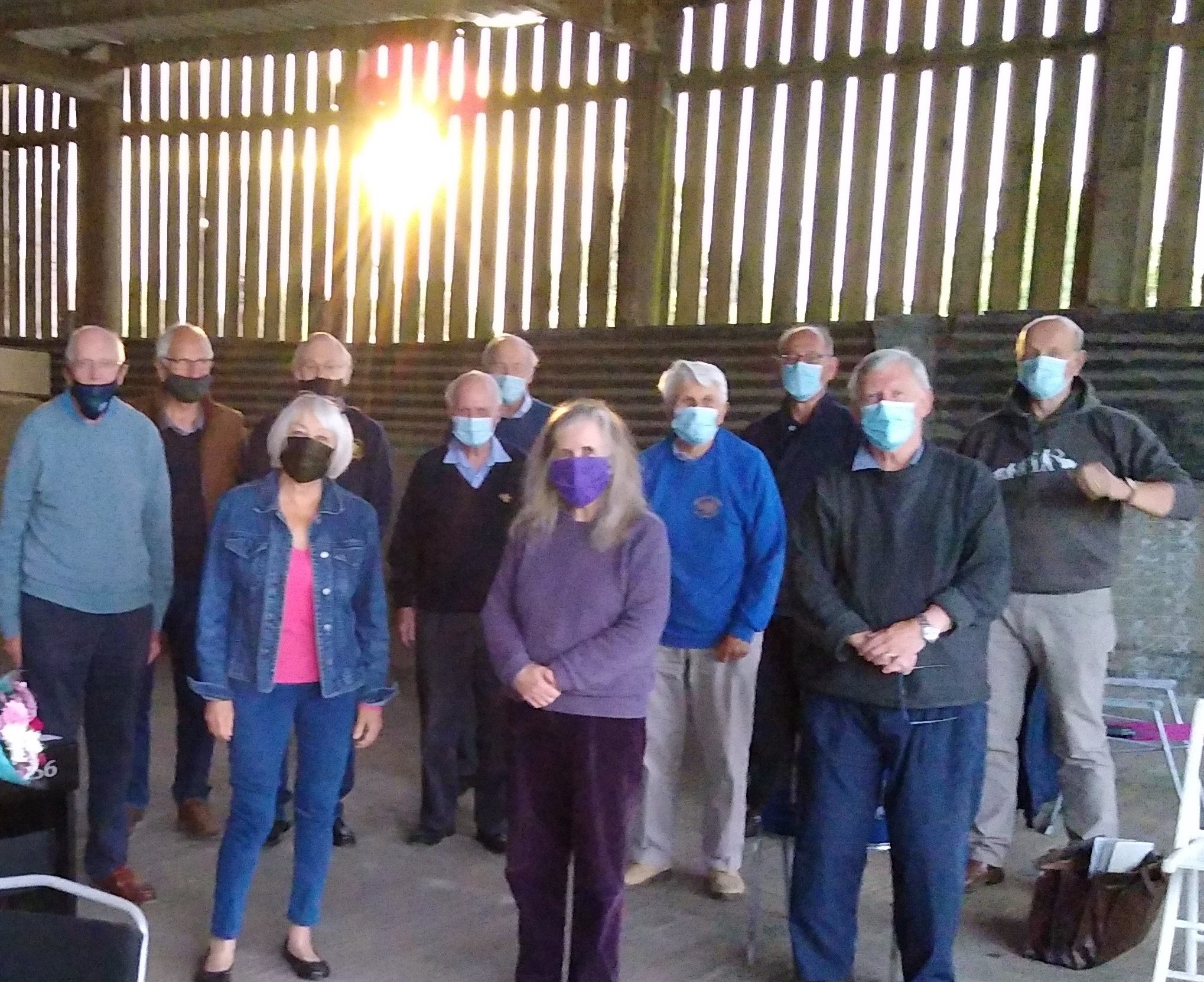 Due to the ongoing medical crisis and “lockdown regulations” we were not meeting or performing en bloc between Feb 2020 and Ist July 2021, but many were in contact via the internet during Zoom practices. We also had the opportunity of using our online practise files so ably collated by choir member Bill Hill. 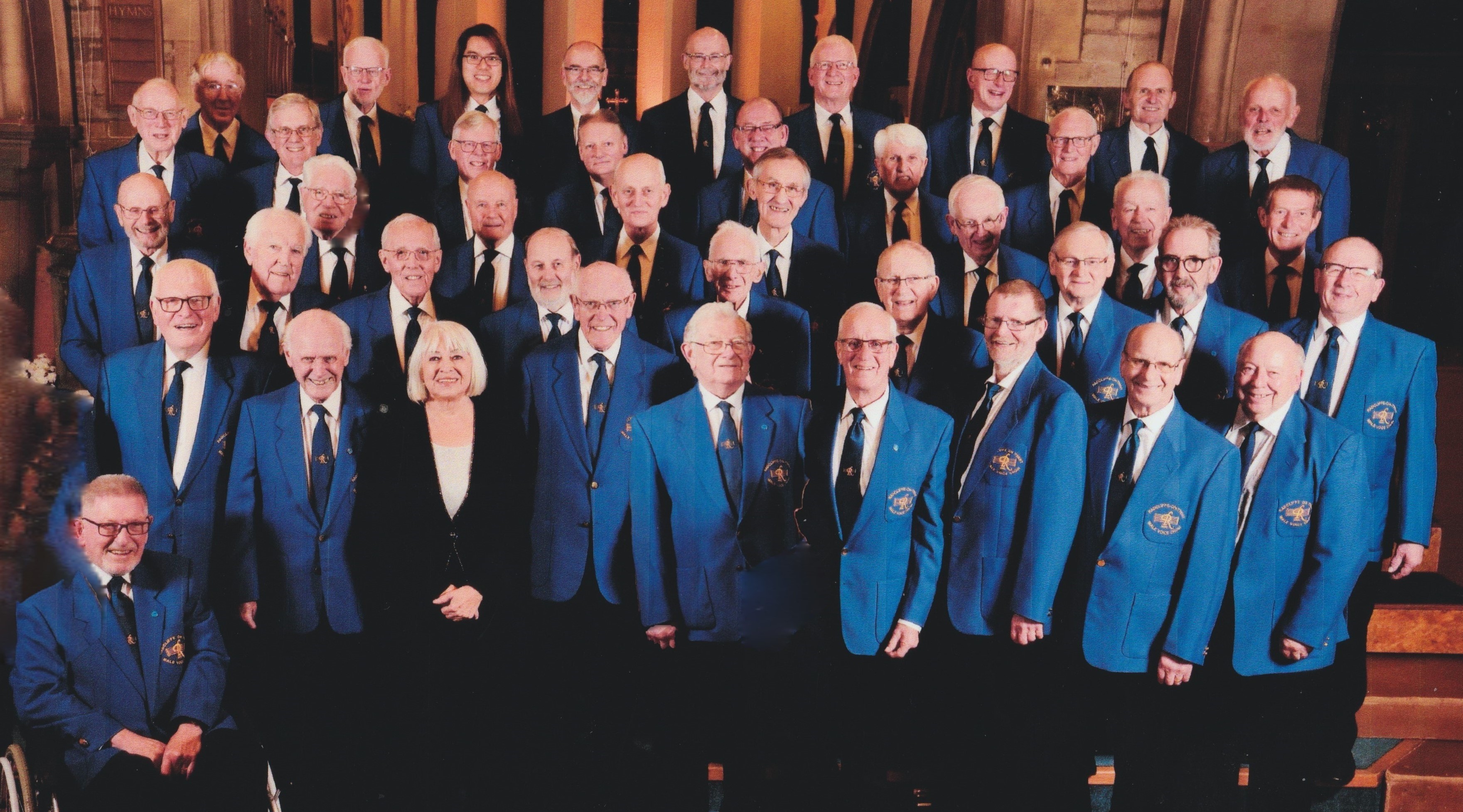 Our Choir circa January 2020

WELCOME NEWS.  We are delighted to announce that,  as of September 2020, Deborah Davies has accepted our invitation to be appointed our Musical Director.

You may not be aware of the fact that almost every public performance by our Choir results in the raising of  Charitable funds, perhaps, for example, for the fabric of the building being sung in or for third-party causes, often local or national organisations.  Examples of the latter include our Annual Christmas Carol concerts which in 2020 would have been directed at  MAGGIES.  Despite the fact that these concerts were cancelled due to the Pandemic a number of sponsors and supporters have together ensured that the sum of £690.00 will be passed on to the above in due course.

As another example of our usual activities you may like to view and listen to one of our recordings, this is one of the HALLELUYA CHORUS as sung in the Chandlers Ford Methodist Church at a joint concert with the Romsey MVC while on tour in April 2016, if so click here.

FOR MORE INFORMATION on the BACKUP Charity visit the following  link:

GENERAL INTRODUCTION  TO THE CHOIR:                              Our home base is the village of Radcliffe on Trent in Nottinghamshire. The Choir was formed in 1983, has sung over 500 Concerts and raised over £400,000 for charity, performing in varied locations including Westminster Hall, The Albert Hall, The Cutty Sark in Greenwich, Nottingham’s Royal Concert Hall, Belvoir Castle, village halls,  20 different cathedrals and numerous churches.  Internationally, the choir has performed in Belgium, Germany, Italy, France and Wales. We have also exchanged visits with a South African Choir while singing at 5 concerts in the Cape Town area.  As well as singing, the membership, friends and families have varied communal interests some of which are seen in the poster below: 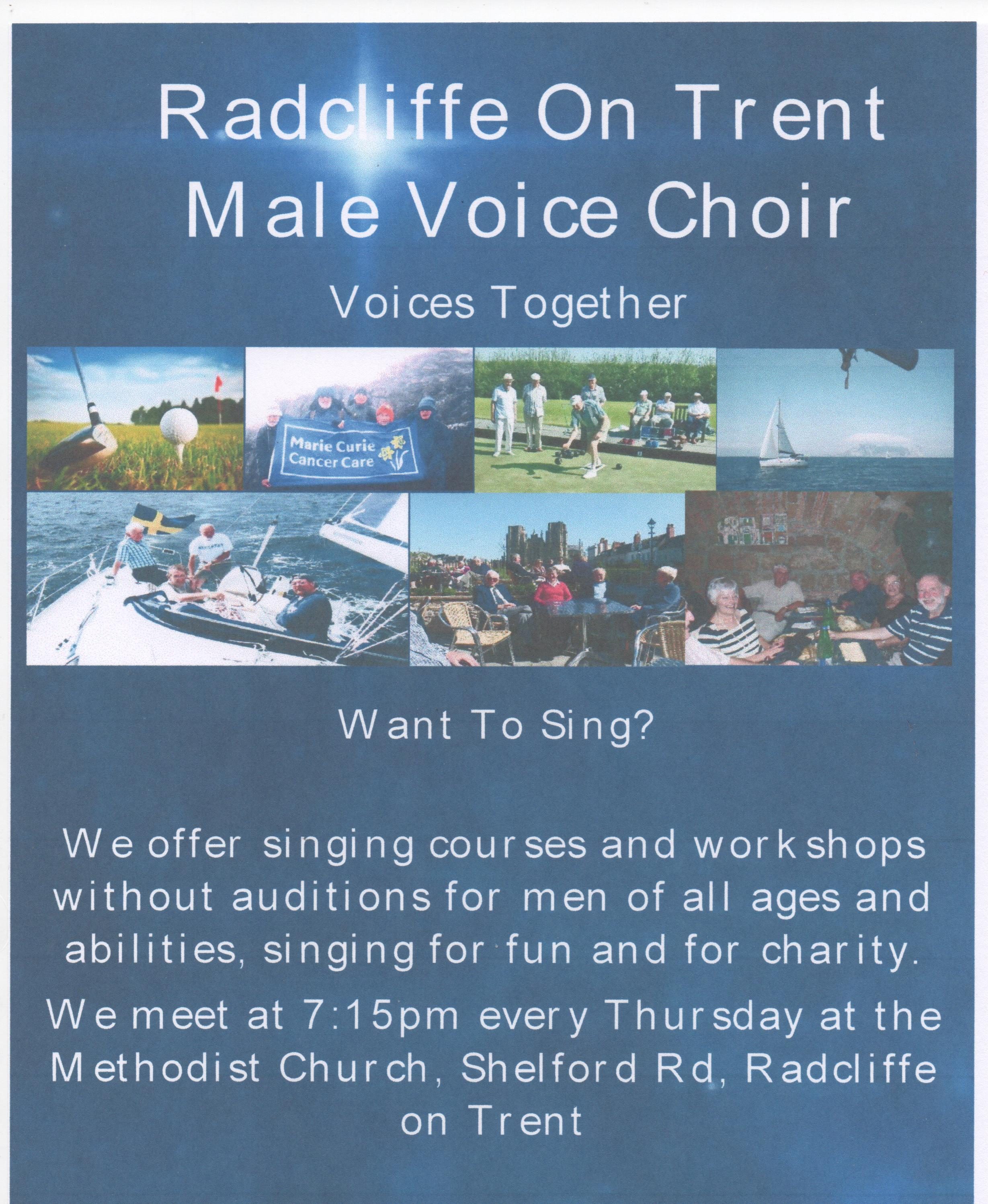 For the latest information on the Radcliffe Male Voice Choir please visit other pages of this website (www.radcliffeontrentmvc.org). Also a Facebook Page has now been launched at www.facebook.com/ROTMVC.

Prior to the Christmas concerts noted above our previous appearance, on Sunday 1st December, was as one of the “acts” invited to perform at the Melton Mowbray Victorian Christmas Market. This enjoyable event was a fine introduction to the festive season both for ourselves and those present at this craft and produce display.

Before that, we sang at the Notts Royal Concert Hall on Sunday 10th November when we joined a number of other choirs in Radio Nottingham’s Choir Festival “MARK’S BIG SING” (see Poster below) supporting CHILDREN in NEED at which over £8000 was raised.  Clicking HERE will show Choir photos and brief singing excerpts:- 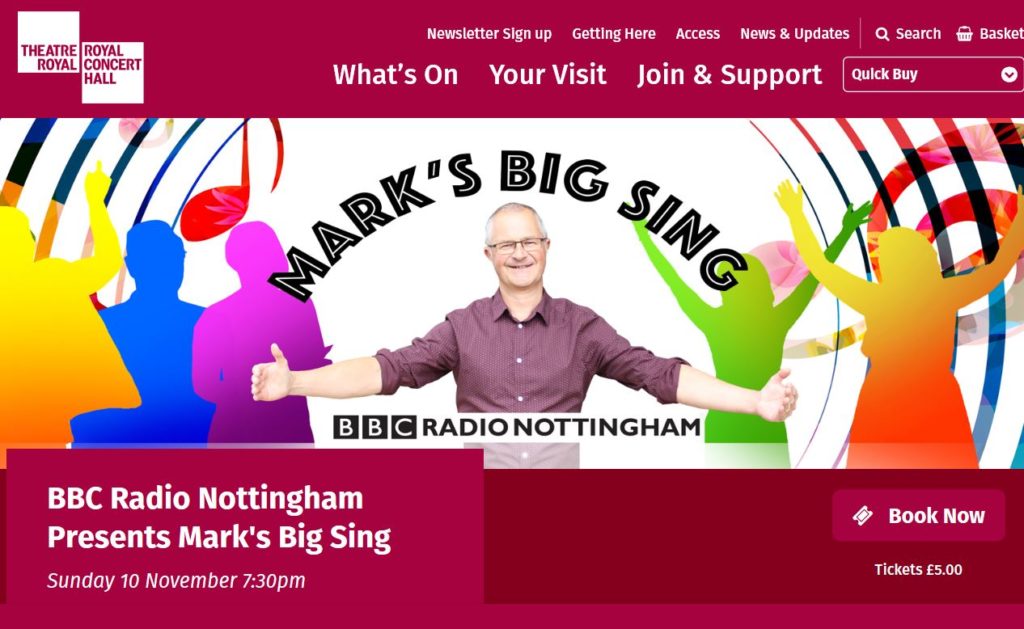 Previous to the above,on October 5th at the RoT British Legion Club we had sung in support of local charities, when we were joined by the very talented ELLIE:- 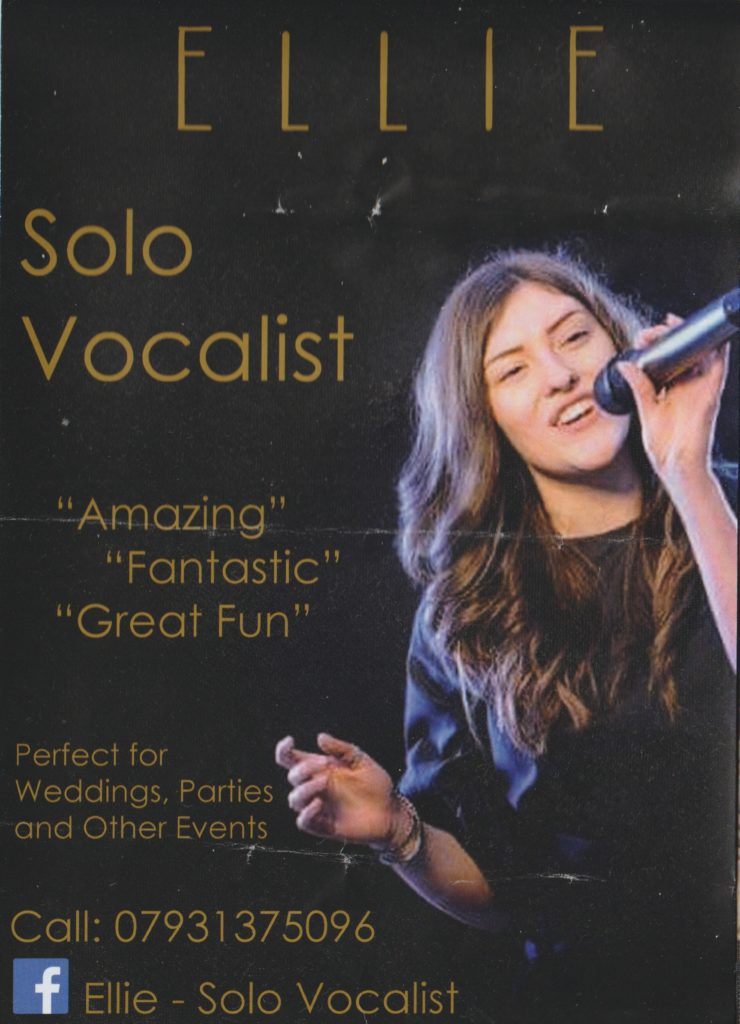 Before our 2019 summer break our three previous Concerts were, on 23rd July, at Lark Hill Retirement Village; on 21st June, at Long Bennington Village Hall and on 11th May, with the Norwich Phoenix Choir at Christ Church, Grantham.

Earlier in the year- we were invited to appear at the RoT Parish Council AGM to receive their Chairman’s award for services to the Community.  See photos below:

Representatives of all Awarded Groups: 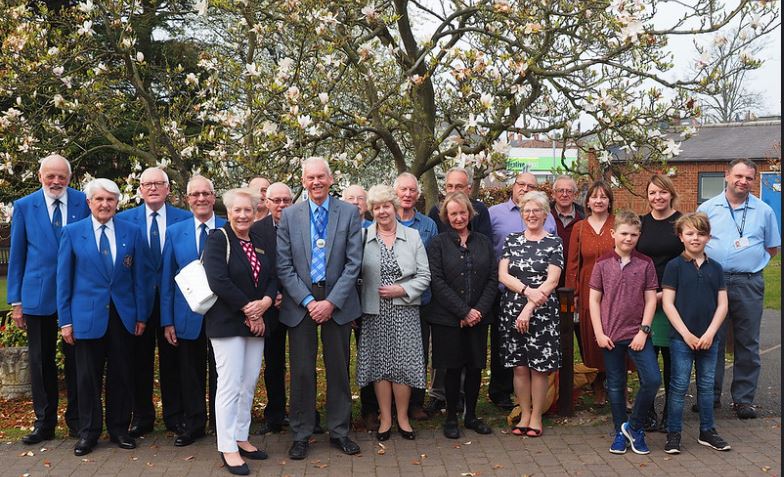 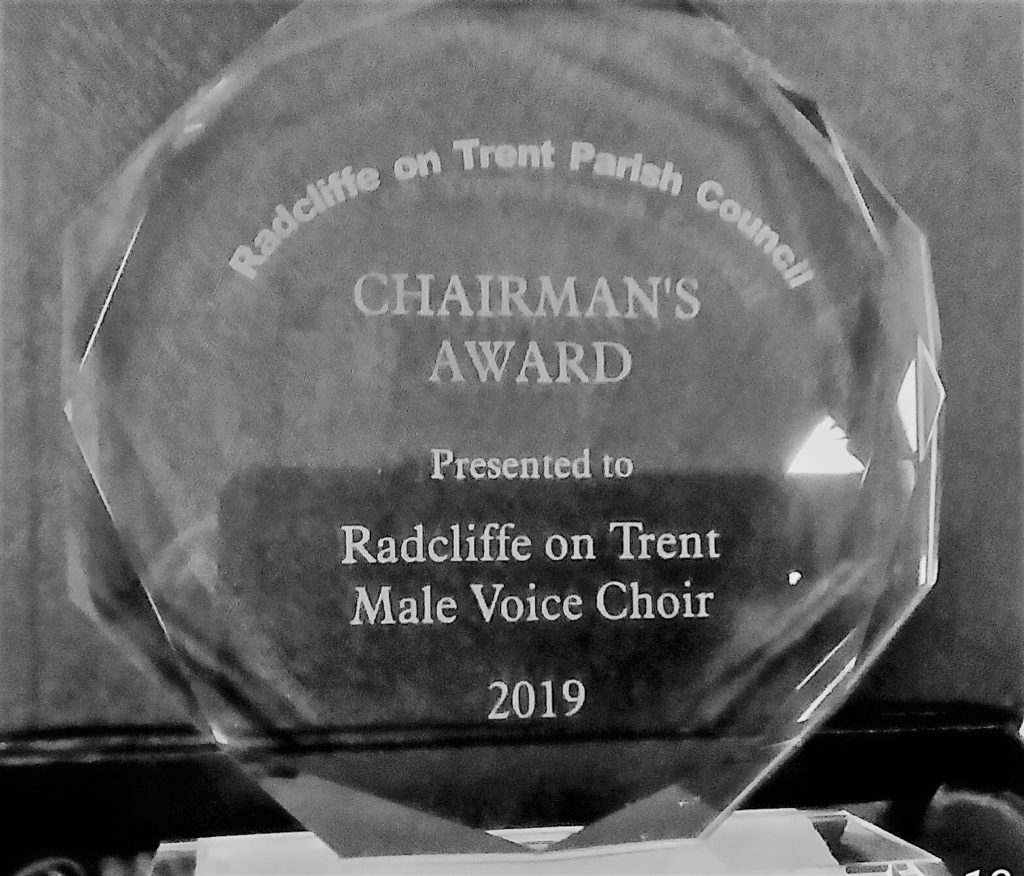 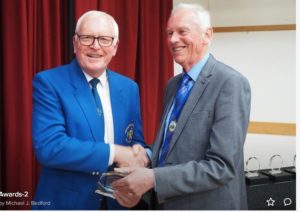 Other recent activities included  a  SPRING CONCERT TOUR from 5th – 7th April, when, while staying in Cheltenham the Choir had 3 engagements:

Early in 2019, we held an eight-week SINGING COURSE which started on 10th January 2019 and attracted 12 new members. To mark its conclusion we, together with the course participants, held a “Mini” CONCERT   on  Thursday 7th March at the Methodist Church, Shelford Rd., RoT, for partners and friends at which 10 numbers were sung, 5 of which were learnt during the course. 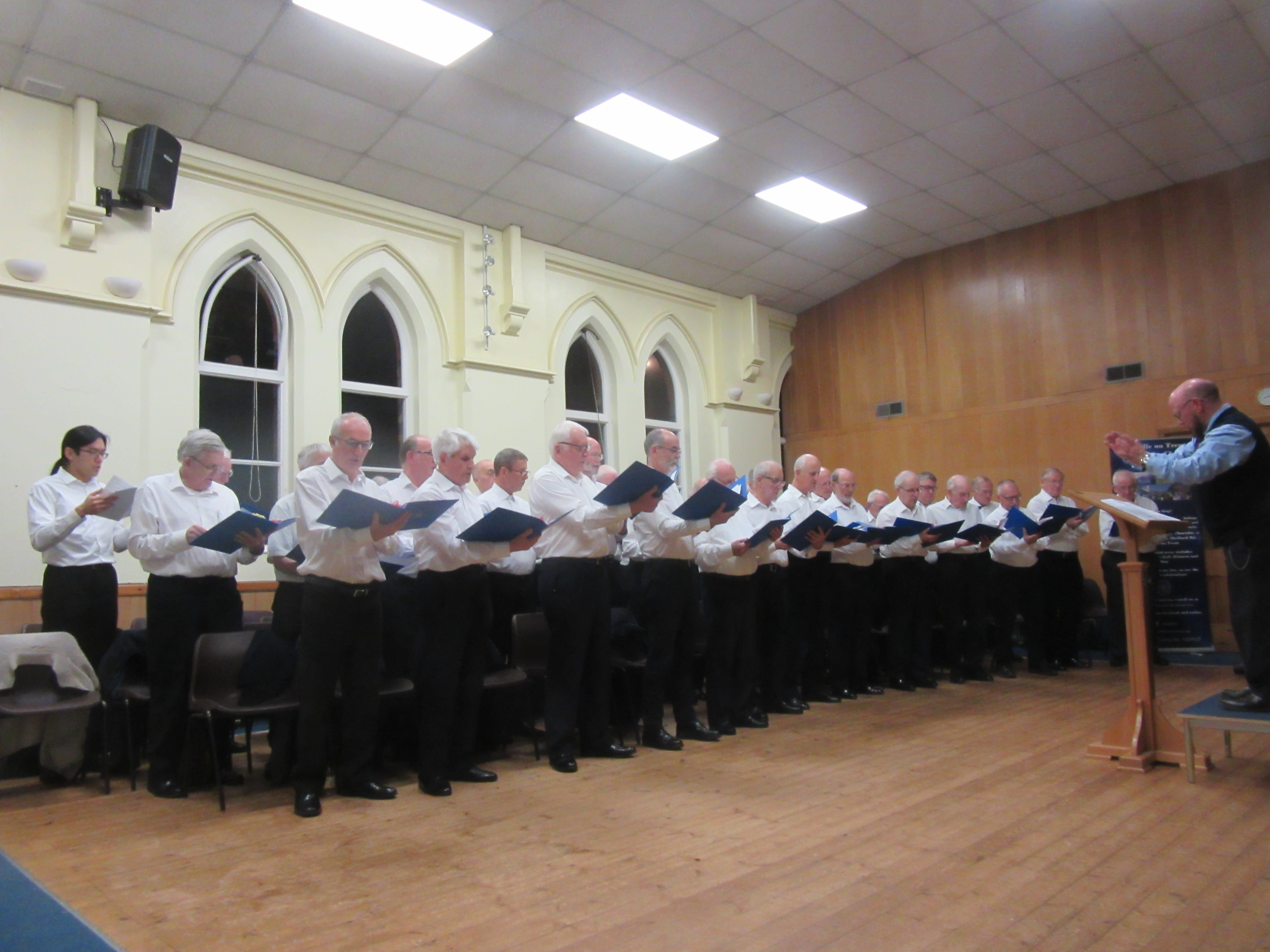 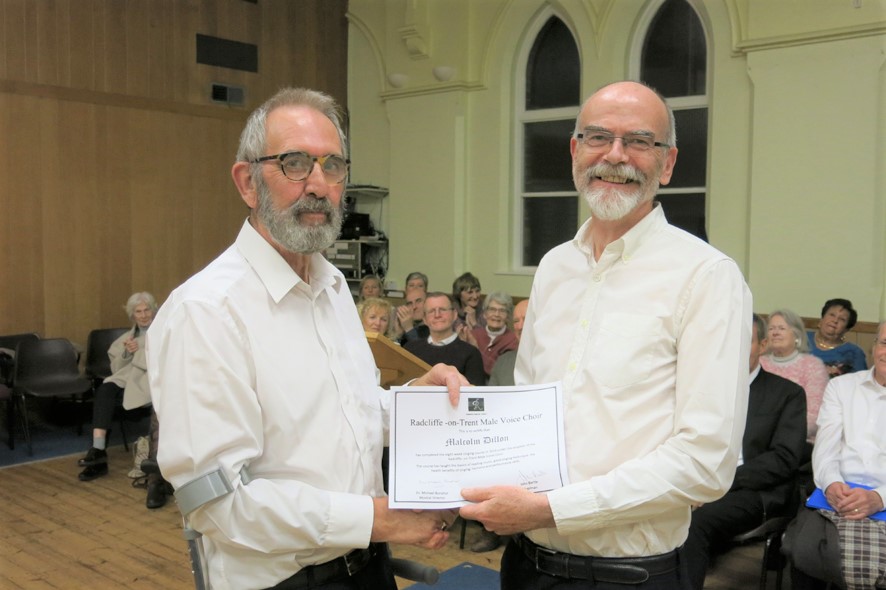 This was an enjoyable event which, incidentally, also raised £386 for Prostate  Cancer Charities.

For more details on courses and workshops click on the heading below:-